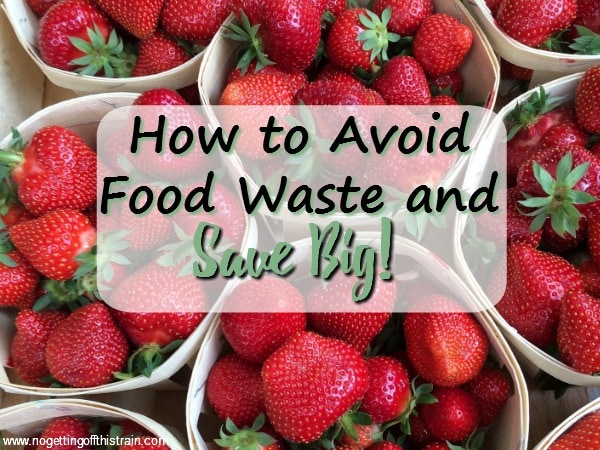 Did you know that most American families throw out 25% of the food they buy every year? (Source) The food waste is insane!! But if you think about it, it starts to make sense.

When you peel and chop off the tops of your carrots, do you throw those away? Do you buy too much food and leave it in the fridge to rot? Or do you put so much food on your plate that you end up throwing some away when you’re done?

I’ll be the first to admit that I’m guilty of buying more produce than we need, and it gets lost underneath everything else and goes bad. According to the article I linked above, the food waste amounts to about $1,365 to $2,275 annually for a family of 4.

So not only are we wasting food, we’re wasting our hard-earned money as well! Take a stand and work together with me with these tips to help avoid food waste.

Use bulk produce for multiple recipes: When you make your meal plan for the week, think about what you’ll be using and how you can make the most of all of it. If a 10-pound bag of potatoes is on sale, don’t just make one meal that uses potatoes (unless you’re using all 10 pounds!).

You can make baked potatoes one night, potato soup the next, and even some baked french fries another night. Taking advantage of cheap, bulk produce will help you save money each week!

Check your fridge before shopping: Have you ever bought a tub of sour cream only to find out there was a half-opened container hiding in the back of the fridge? Or better yet, you buy strawberries but realize you already have a half-rotted container in the bottom drawer?

I’ve done this before, and I get so mad about wasting the food I’ve spent so much money on. Before you go on your grocery trip, check your fridge to make sure you don’t already have what you’re buying! This is where an app like Out of Milk comes in handy, to keep track of what you have.

Buy less food: If you find that you throw out expired food because you simply can’t eat all of it, don’t buy as much. Instead of 2 containers of strawberries, just buy one. The worst that can happen is that you have to go back to the store later in the week.

I know, taking your kids back to the store doesn’t sound very appealing; at least it might give you inspiration to make your food stretch! 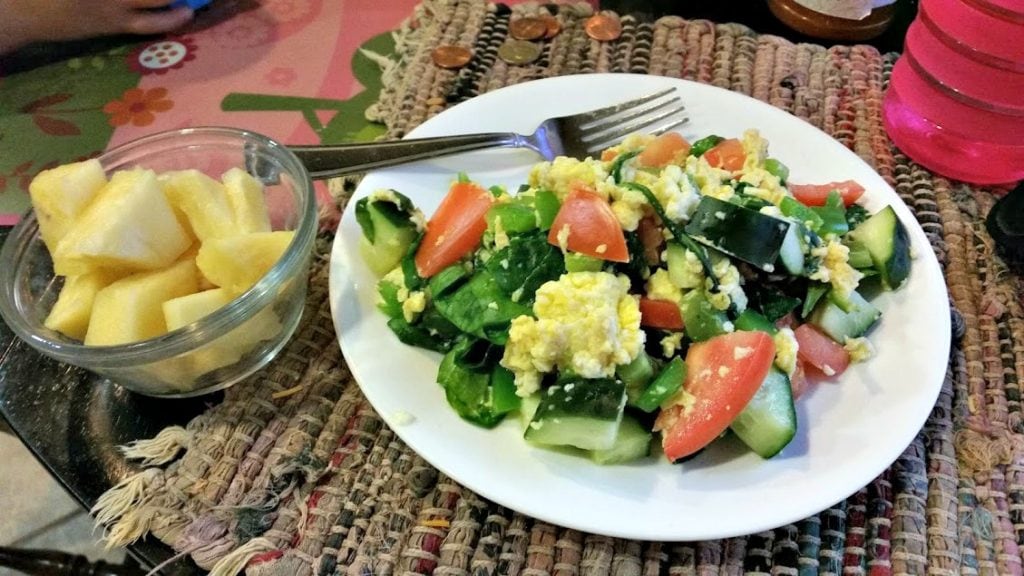 Tell me if you’ve been in this scenario: You buy a package of spinach to use a little in a recipe, but by the end of the week, the rest is still in your fridge getting ready to go bad. And you decide to throw it away because you can’t do anything else with it.

I’ve been there! But you don’t have to pitch food just because you think it’ll expire soon. There are SO many ways you can re-purpose items; here are some examples: 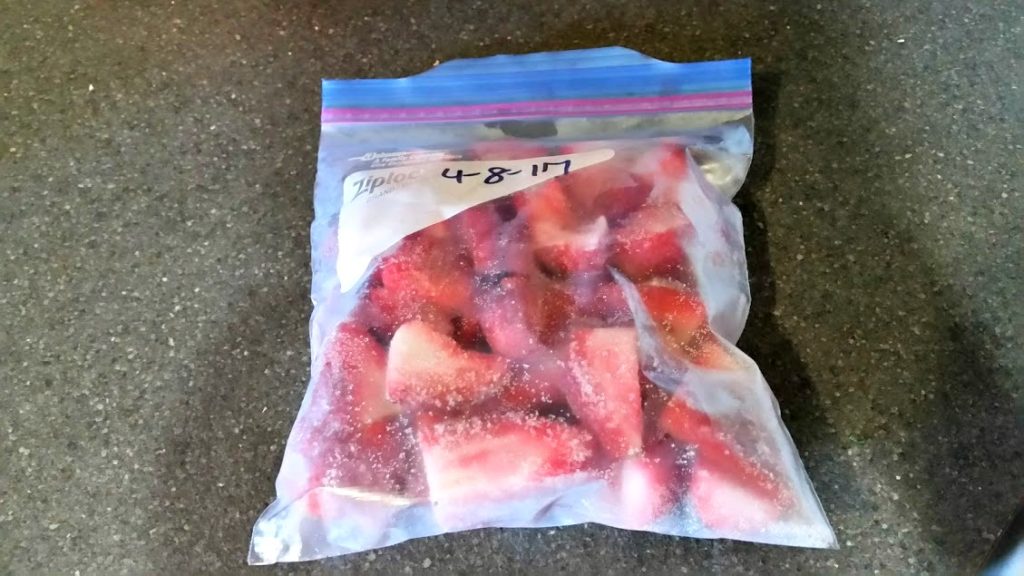 Freeze the rest for later

If you still feel like you can’t use up your leftover food, there’s nothing wrong with freezing the rest for later! I’ve frozen berries, bananas, pineapples, bell peppers, meat of all kinds… just make sure you place your food in freezable bags or containers and label them. 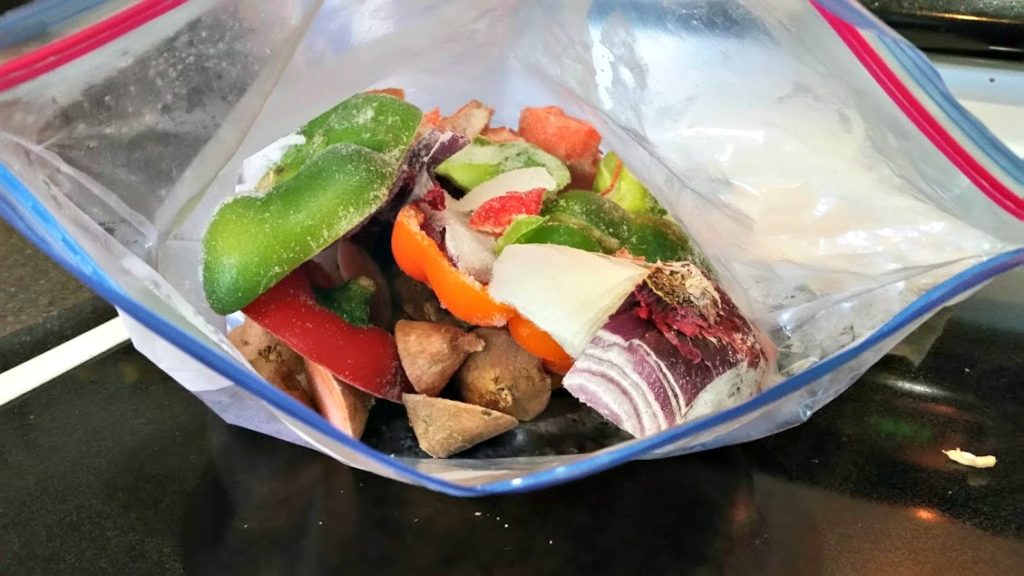 One thing I’m starting to do is collect vegetable scraps- the ends of potatoes, carrot ends and peelings, bell pepper pieces- and put them in a bag in a freezer to eventually make vegetable broth. How cool would it be to have a free, endless supply of broth just hanging out in the freezer? Not to mention it would probably taste delicious!

So the next time you peel potatoes, stop and think about what you could do with the peelings. If you have almost-black bananas, don’t throw them out! Avoiding food waste requires a bit of careful planning, but the savings of the environment and your money is totally worth it!

What kind of things do you do to help avoid food waste? Share in the comments and give us more ideas!

Remember to save onion root ends, clean onion skins add color. Add a sweet potato to boost nutrition. Add some dried seaweed to increase minerals with little added taste. (sushi sheets are cheap) Save the tips of your garlic when roasting.... stems from greens and herbs are great. Add bay leaves. I get 12 cups of broth from gallon bag of scraps. And yes, I do add salt to taste.

Hopping onto an older post I found on Pinterest, but I was wondering if you ever got around to making the vegetable broth/stock. I've been making my own for a few years now and would like to offer a few suggestions....

No potatoes or starchy veggies. It makes the stock cloudy and a bit glue-y as the vegetables release their starch.

No tomatoes. Depending on what I am using the stock for, (cauliflower/garlic soup, broccoli cheddar soup) I usually do NOT want a strong tomato taste.

Scrub your veggies before you peel and cut them. so that you aren't adding residual dirt/debris to your stock.

Some people recommend NOT using brassicas (cauliflower, broccoli, greens) but I don't know why as I've never experienced any issues using them.

Do add some seasonings (bay leaf, pepper corns, parsley) to the stock as you are creating it, but avoid salting it, as you never know where/what you will be using it in. Keep in mind that if you use it in place of canned stock in a recipe, the recipe may need additional salt to account for this.

Have a fine sieve ready to strain this off before packaging it. I usually first run it through my regular colander, but the floating veggie bits need a fine strainer, so I also do a second run through as I distribute it into its final bottles (ready for the freezer).

Package it/bottle it for the freezer in the portion size you would normally use. For me that is 6 cups, as many of my favorite recipes use 3 cups and I often make double batches as I cook. That way I don't end up with one or two cups leftover that I don't have a use for.

Package it in whatever you have in abundance (as long as it is food safe). Keep in mind that if it is plastic, you should cool your stock before putting it in the jar. I use large nut containers that came from Target.... but they do melt/deform if the stock is hot. Lesson learned the hard way!

More words than I intended..... but just wanted to share my experience!

This helps me so much, Pamela! Thank you! I had good intentions of actually making stock, but never got around to it. There are still scraps of veggies in my freezer though, so I'll have to pick it back up. =)

Instead of throwing out those left over slices of bread, make croutons for your everything salad or make bread crumbs.

Great idea! I've yet to make my own croutons. One time I actually took 4 hot dog buns that were about to expire, tore them into pieces, and put them in my breakfast casserole. =) Delicious!