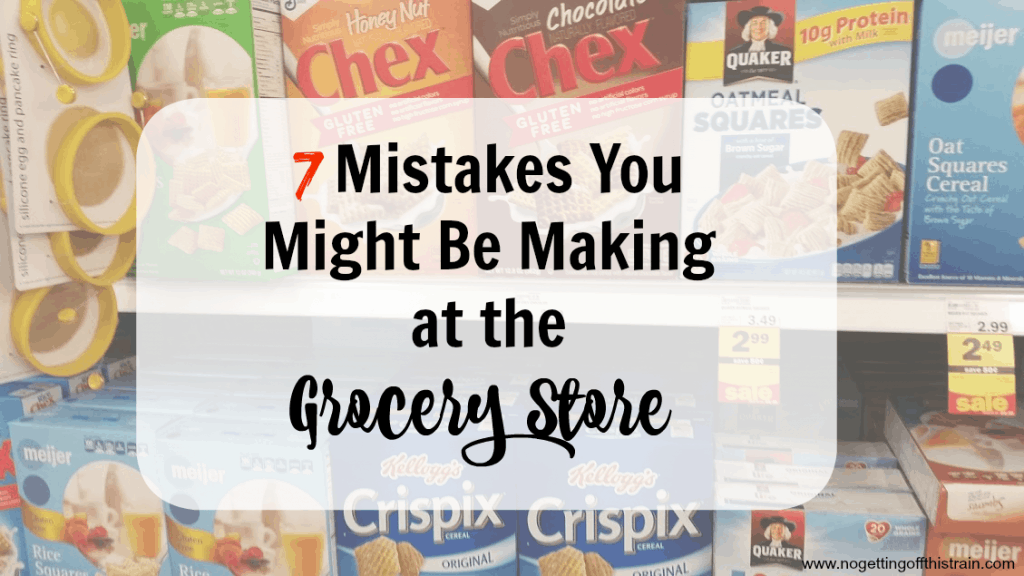 I don’t know about you, but I love grocery shopping. Maybe I’m strange, but there’s something about getting the most for my money that’s like playing a game, and I usually win.

I’ve hit bumps along the way, recovered, and changed my game plan, and found some interesting things at the grocery store that I want to share with you today.

There could be some mistakes you might be making at the grocery store that are costing you money; are you guilty of these like I was? 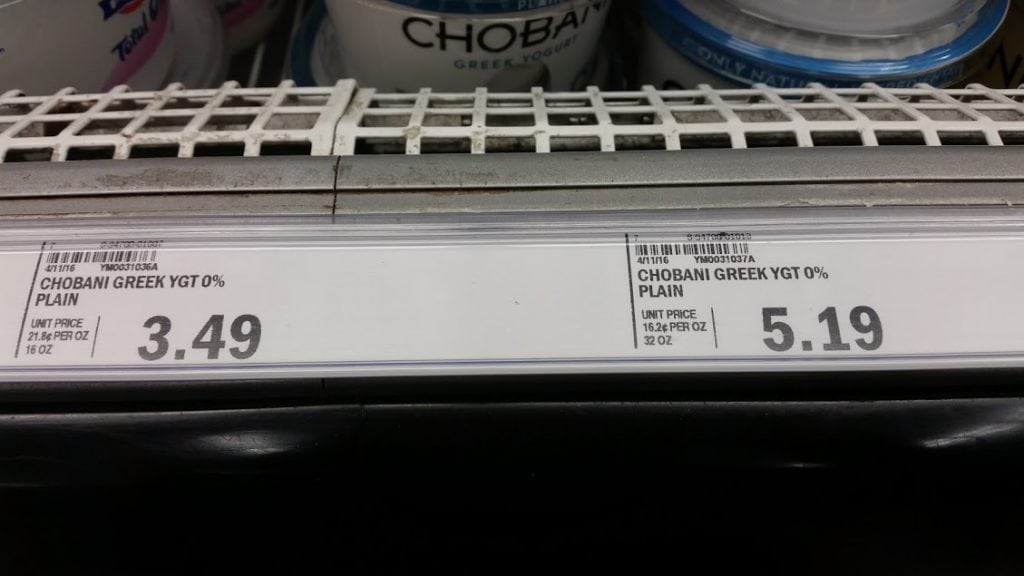 I can be guilty of this, too. Buying the bigger container means it must be cheaper, right? Not necessarily. Often times, the smaller containers, when on sale, can be cheaper than buying in bulk. Remember to use this formula whenever you’re in doubt:

Price divided by ounces in the container = price per ounce

You can also turn this around, like the above picture, and go ahead and purchase the bigger container because it IS cheaper overall, even though you pay more at first. Just make sure you use it up before it expires! 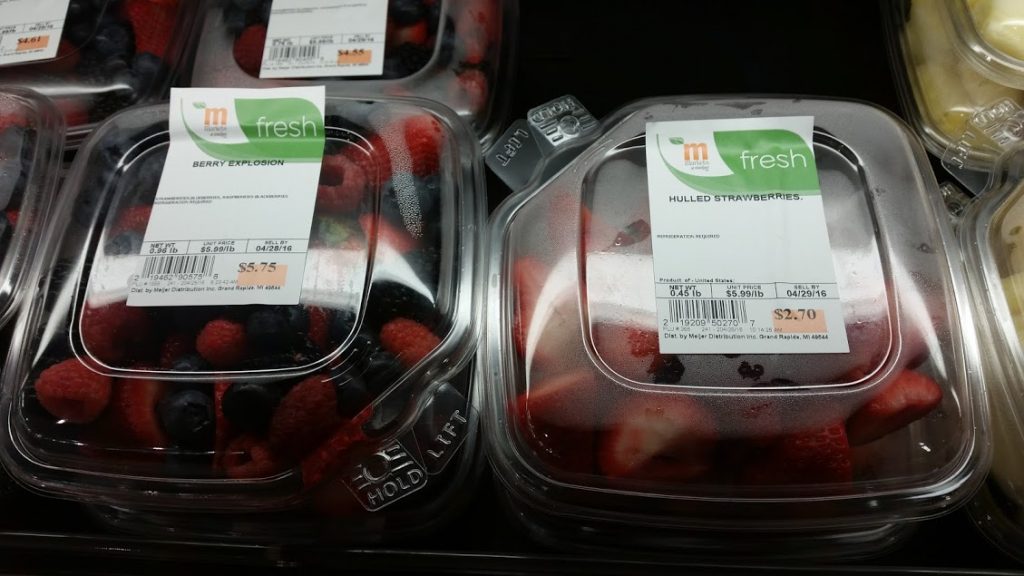 In the produce aisle is usually a small section with pre-cut produce: cubed pineapple, cut-up strawberries, sliced bell peppers… but have you checked the price tag? You definitely pay more for convenience here.

At my local Meijer, a 1-pound box of strawberries goes on sale for about $1.50, but a package of pre-cut strawberries, like the picture above, is $5.99 a pound! That’s crazy! It is a little more effort to cut the strawberries yourself, but if you do it right after you get home from the store you won’t be as likely to forget about it later. Not taking advantage of rewards systems

Did you know you could be throwing away money by not using the rewards system of the store you frequent most? I’m mostly talking about Meijer and their mPerks program, because that’s the one I use most often.

While they do have a great coupon section that you should take advantage of, their Rewards section can be the real winner here. You can clip rewards to use within the month that will give you money off your next order if you hit the threshold.

During Thanksgiving/Christmas, I can hit that one at least twice due to all the food/presents I buy! That’s a lot of money back for shopping I would do anyway.

Before I got married, I would head to the store to buy lunches for the week. I used to work at McDonalds, so instead of eating their food every day, I’d just go to the store to see what looked good. Before I knew it, my cart was filled with chips, Lunchables, cookies, and tons of other things that I’d end up not eating and just wasting.

Making a grocery list is the best way to save money at the store as well as keeping you healthy, as having a list helps prevent impulse purchases. For more help, read my post on how I meal plan!

Just because the sale says “10 for $10” doesn’t mean you have to buy all 10 items (Unless it specifically says otherwise)! If you only need one can of soup, just buy one. It’ll still be a dollar.

Kroger’s really good at doing that; they entice you with like the entire store being 10 for $10, and some of that stuff isn’t even a good deal at a dollar. Just be careful and only buy what you need!

Not looking at the ad

My favorite day of the week is Sunday, because that’s when I get the newspaper! And with that comes not only coupons, but store ads as well. Using the ads is one of the most important aspects of my grocery shopping because they show me what could potentially be the lowest price on certain items. The best deals are usually found on the front page, to entice you to come in.

Pro-tip: If you have a Meijer in your area, sign up for their email list or just go to their Facebook page on Fridays when they post the preview ad for the next week. Many times I needed to buy something, but looking at the ad I realized that very item was going on sale next week so I’d wait until Sunday to get it! 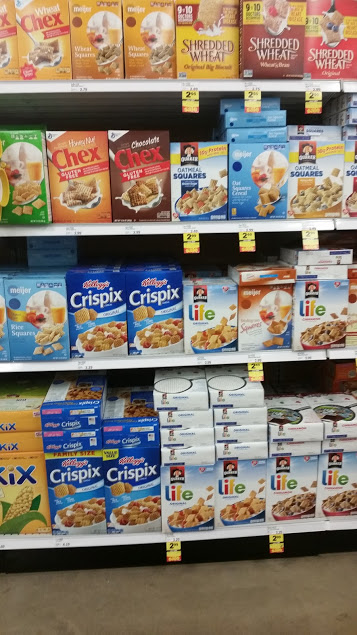 Not looking past eye level

Grocery stores can be sneaky. They put the expensive, name-brand items right at eye-level so it’s the first thing you see and grab. I’ll bet that if you look either up or down, you’ll find the store brand at a cheaper price! For the most part, store brand items taste just the same and are the same quality as name brand, so don’t be afraid to branch out.

I definitely agree with the 10 for $10 thing. I used to work in a grocery store and knew that you didn't have to buy all 10 for it to be $1 each. Having lists also saves you time, money, and aggravation! Pre-cut produce sounds nice until you look at the price tag. I'll cut it myself, thanks, lol. And the sale flyers are the best thing ever. These are so true haha!

I have been using your advice and can already see a huge savings. Going to Aldi has saved us tons! Thank you for sharing such sound advice.

Some great tips! I actually really love grocery shopping too because I swear I get a "deal high" (pretty much with all cheap things, actually, hahaha). My local grocery chain (Shaw's) has a semi-similar rewards with a free offer good fri-sun every week but nothing like your Meijer deals! I'm a tad jealous (especially since you have an Aldi too!).

Glad I'm not the only one who loves grocery shopping. :P Our Kroger stores also offer a free item every Friday that's good for like 2 weeks. This week was a loaf of bread, so I'm totally taking advantage of that!