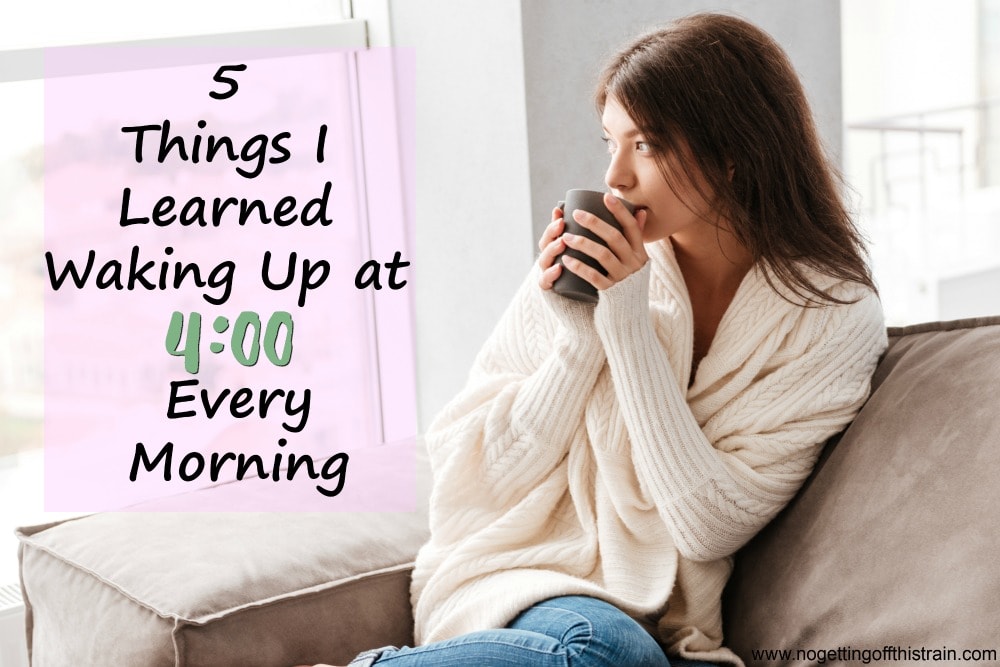 Early to bed, early to rise.

The early bird catches the worm.

Have you ever wanted to strangle whoever came up with those sayings?

We moms are always tired. The kids are always there, and we feel like we can’t catch our breath because things are always too busy, too hectic. Can’t we just get a little extra time?

Well, I found the secret, and you may think I’m crazy (I am). But I’ve been waking up around 4:00 AM for the past couple years to start my day, and it’s been the best decision I’ve ever made. I’m happier, I’m more productive, I’m a much better mom. And before you start thinking, “I could never do that”, just hear me out. You might just change your mind. Here are 5 things I learned from waking up at 4:00 every morning:

It’s not as hard as you think

Back in my teenage/young adult years, I worked at McDonalds. I preferred the morning shift because then the rest of the day was all mine, so I ended up having to wake up early. Now, early for me was 3:00 AM because my shift started at 4:00; I also had to start that immediately instead of gradually easing myself into it.

Do you think that waking up earlier makes you grumpier? What is waking up with your kids doing to your mood?

Are you rushing around in the morning trying to get everyone ready? Do you just wish you could sit down and enjoy a cup of coffee without having to reheat it?

Right after I had Allison, I realized I NEEDED some “me time”. There was no way I could be a decent mom if I didn’t have room to just breathe. So that’s why I decided waking up early was the only way I could get this time, and I haven’t looked back.

I have time to drink a full cup of coffee and read my Bible, and just bask in the quiet. Do you know how silent it is at 4:00 AM? Pretty darn silent without a child running around! I have 3 full hours of kid-free time in the early morning and it’s made me a much more joyful person knowing that I’m actually me, and not just a mom.

Now, I work from home, so my definition of productive might be different from yours. I need time to write, schedule social media posts, plan out my month… And it’s so hard to do that during the day when distractions are everywhere. I’ve quickly found that the early morning is my most creative time, so I take advantage as much as I can.

If you’re a full-time mom and don’t have to worry about work-related stuff, this could be your time to get caught up or get things ready for the day. You could empty the dishwasher, pack lunches, declutter the kitchen or living room… the issue is that you have to be quiet or else the kids will wake up and your quiet time is now shot.

Or, you could always read that book you’ve wanted to start, or start a creative project. I listen to podcasts and audiobooks, so my best time to do those is when Allison’s not around.

You finally have time to exercise

Oh no, I said it. The dreaded exercise. I never worked out a day in my life until I had Allison; and it wasn’t until 2015, when she was about a year and a half, that I decided I wanted to get back to pre-baby weight.

I ended up buying PiYo, a Beachbody workout program, and used that as my main form of exercise before buying a Fitbit. Each video is between 20-48 minutes, which is easy to squeeze in if you wake up early. I ended up losing 25 pounds in about a year after I started exercising and eating better, and I owe a lot of that to waking up earlier to get the workouts in.

I’ll throw this in here, too- Walking around the house is considered exercise, as well! I frequently pace the living room and kitchen for 15-20 minutes in the morning to get my steps in because I can’t just go outside and leave Allison by herself. Walking can be quieter than workout videos; so if you have kids with supersonic hearing, just walking can be a better option and still a good way to get light exercise.

Waking up early also means going to bed earlier. I was never a party animal; but in my earlier years I’d stay up till almost midnight either watching TV or messing around on the computer. Nowadays I cringe at the thought of being up that late!

Allison goes to bed around 7:30, which gives me and John a little time to clean up and wind down before we settle into bed between 8:30 and 9:00. Yes, that’s extremely early. And I laugh a lot in the Summer when we go to sleep while it’s still daylight. But when you start waking up earlier, you have to make up for that by going to bed earlier. Not getting enough sleep will damage your mood far more than waking up early will; so try being in bed shortly after your kids are.

I know it sounds hard, maybe even impossible. Maybe you’re a self-proclaimed night owl and would never dream of waking up early. But read over these benefits again and decide whether waking up earlier will be more beneficial to your sanity and if it’s something you could just try for a couple weeks to see how things go! What do you have to lose?

What time do you wake up in the mornings? Are you more productive before the sun rises? Leave a comment and let us know!