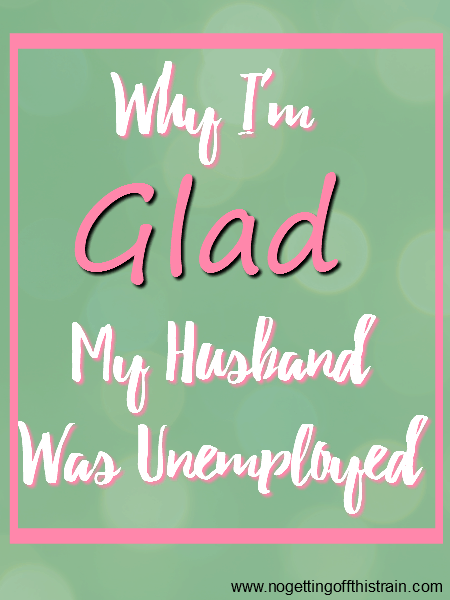 Having the word “was” in the title can only mean one thing: John has a job again!!! He started on Monday in a contract position and we couldn’t be more excited. So far, so good! Thank you all for keeping us in your prayers these last 4 months, it’s meant a lot! I won’t say it was easy, because it really wasn’t. Being unemployed took its toll on both of us, mentally and emotionally, and it was especially tough because it was his first time being let go from work since we had Allison. There was a major learning curve of trying to do life with both a toddler and husband at home, but we made it work. In fact, for the most part, I’m glad John was unemployed for 4 months. Here’s why:

He was able to spend more time with Allison.

Let’s face it, kids grow up fast. Way too fast. I feel like I’ve blinked and Allison’s already almost 3! Being at work all day, it’s hard to really see what Allison does in a day and how she learns and grows. John got to spend a lot of one-on-one time with her, which benefited both of us. John got to see his daughter, and I got some much needed time to myself! I know it’s going to be an adjustment now that he’s back to work. We did more summer activities together.

John got let go at the “perfect” time. It was late spring, so summer was just around the corner, which meant more outside activities. We received season passes to Kings Island for Christmas, so we went at least once a week. Since we could go on weekdays, the park was less busy so we got to enjoy a lot more rides. We also have a membership to our local children’s museum, so he was able to go there with us more often too! It’s hard to do all this in the evenings, so I’m glad we were able to get that quality time in and have fun.

We learned more about Wants vs Needs.

For those that follow me, you’ll know that we cut our grocery budget in half to help make our money last until the next job. That was a real eye-opener, as I realized how much useless stuff I was actually buying. It wasn’t always bad stuff, like the occasional snacks and desserts. But when you’re working with $30 a week, you have to decide what you truly need for that week, and it took careful planning. I realized that we were actually eating healthier with $30 than we were with $60, because I was constantly trying to calculate the best bang for our buck nutrition-wise.

In addition to food, we also had to opt out of certain events and festivals just because it wasn’t a necessity at the time. Yes, it meant we didn’t have the same kind of fun as everyone else, but we had to prioritize where our money went. We have season passes to Kings Island as well as the food plan, so that’s pretty much been our entertainment the past 4 months. It takes an hour to get there, which probably isn’t great for gas, but it was much cheaper than anything else we could have been doing.

We never truly went without these past 4 months, and I thank God for that. It was great having John home, but I’m even more excited that he’s back to work. If you’re facing the same situation, try to focus on the positive things, like the extra family time. Everything will work out in the end; keep your head up!

Awesome. We are 2 adults and try to do $90 a week for food and toiletries. It's difficult and we don't even eat meat. Good luck.

Wonderful news! Will you be going back to the $60 a week for groceries?

Thank you! We're actually looking into upping our grocery budget to $75 a week so I can buy more and healthier food. I'll update you all in another week or so once he gets settled in!

So happy to hear your positive spin on the job loss AND that John is back to work!

Yes! We're both excited to get back to a normal schedule again. =)