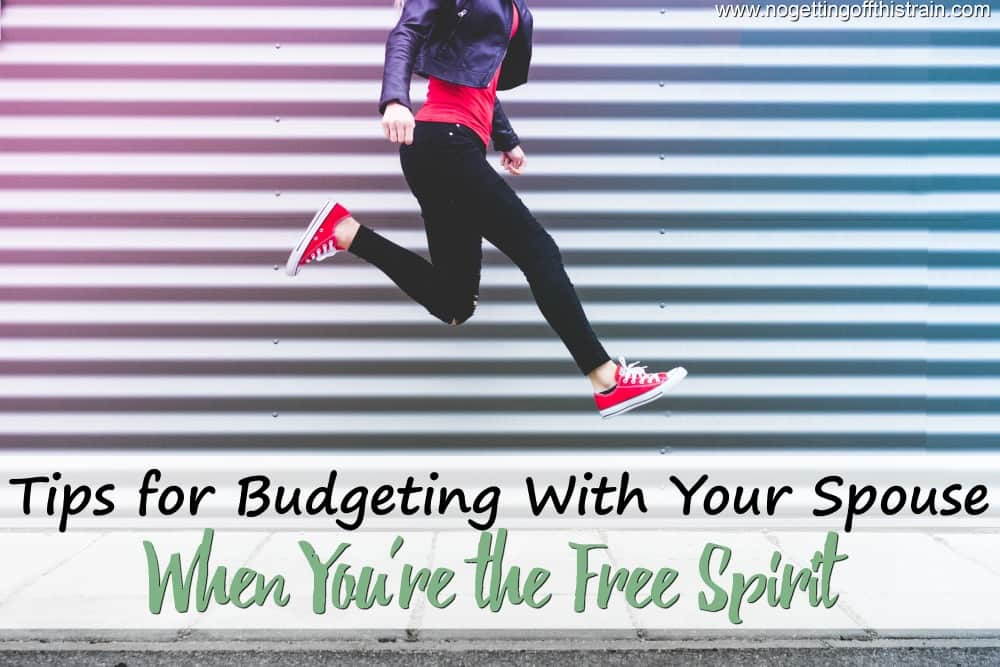 Do you regularly keep up with your budget with your spouse? Or does the thought of tracking income and expenses turn your brain to mush? If the latter sounds more like you, then you might be the Free Spirit in your relationship.

If you’ve ever taken Dave Ramsey’s Financial Peace University (and if you haven’t, I highly recommend it!), you’ll know that Dave categorizes people into two groups: the Nerd and the Free Spirit. The Nerd is more of the numbers person and wants to keep a tight watch on exactly what’s going in and out; and the Free Spirit mainly wants the Nerd to handle everything money related and is usually pretty easy-going.

These are stereotypes and may not exactly describe you and your spouse, but at this point you probably know who is who. I’m definitely the Free Spirit and John is the Nerd, although we do show qualities of both. Since we’ve taken Financial Peace University, I’ve become more in-tune with what the Nerd needs and want to share that with you too. Budgeting with your spouse when you’re the Free Spirit has its benefits and challenges, but you can find a way to make it work!

Make sure you stay informed with what’s going on

First of all, make sure you have your monthly Budget Committee Meetings scheduled! This is the easiest way for both of you to stay in the know. Sometimes things will happen throughout the month, though, where you’ll need to re-adjust. And it’s okay for the Nerd to make the budget, but the Free Spirit needs to give input, too.

Just recently, John had set aside some money to buy some new work shoes. He only ended up spending half of what he budgeted, and decided he wanted to use the leftover cash to buy more work clothes. But, instead of just doing it, he asked me first if that was okay. If we had needed that money for something else, I would have spoken up; but since we were doing okay, I told him to go for it. See how budgeting gives you the freedom to be able to say YES to new things?

Sometimes the Nerd gets so excited and wrapped up in the numbers that he just goes crazy. He’ll start making spreadsheets and house payment trackers, and will be able to tell you exactly when you’ll reach your emergency fund goal and can start saving for a new car. This is all really important stuff; but if the thought of looking at one more spreadsheet makes you want to bury your head in a pillow, it’s okay! You don’t have to be on fire for numbers, but it’s good to be patient with him while he does his thing.

Sometimes all the numbers will go over your head; and in this case, it’s okay to just ask for the Cliffs Notes version of all these trackers. You don’t always have to know that if you do X and Y for 13 months that you can do Z; usually just knowing the end-goal is fine, myself included.

Don’t be afraid to speak up

If there’s something you don’t understand or don’t agree with, please say something! The Nerd may have made the budget, but he’s not the Overlord. You’re a team, and he wants your opinion. Try not to just say “Whatever you want to do” if you have a problem with something. The budget won’t work if you’re not both in alignment.

Also, we Free Spirits may be pretty laid-back and just go with the flow, but giving opinions is also super important. You may end up coming up with solutions to problems you didn’t even know you all had!

This is a pretty big stereotype: That the Free Spirit is a compulsive shopper and tends to spend more money than they have. And it’s definitely not always true; the Nerd can have spending issues, too! No matter which of you has a problem (if at all), make sure you control how much you spend. One way to do this is to set aside some “fun money” for yourselves every month. John and I each give ourselves $20.00 to spend guilt-free; and as long as we stick to just that $20.00, we’re able to control our spending.

Communicate with your spouse when you spend money

I am so guilty of this at times. My biggest problem is putting gas in my car and not giving John the receipt. Then he’ll sometimes spend quite awhile agonizing over why the budget isn’t balancing, and that’s when I’ll remember the receipt stuck in my wallet.

If you need to buy something that day (particularly if it’s a bigger purchase, like over $20.00), make sure you at least let your spouse know. It’s not quite asking for permission, but rather a heads-up in case there’s not enough money in the account. I sometimes purchase random groceries toward the beginning of the week instead of waiting until Friday; and usually it’s not a big deal, but John will let me know if our checking account is low and I shouldn’t spend any money till the end of the week.

It’s okay, Free Spirit! Don’t let this post sound like a bunch of rules you have to begrudgingly follow. Budgeting is very freeing, as you’ve hopefully gathered from the other three posts in this series (Haven’t read them yet? Look below for links!). You can do so much with your money once you have a working budget in place, and soon it won’t even feel like a chore. Are you the Free Spirit in your relationship? Post any tips you have in the comments below!

Other posts in my 4-week budgeting series: