You may have seen me talk about my Fitbit quite a bit and how it’s helped me keep track of my exercise and daily steps, and has motivated me to get up and move more.

I got it back in May around my birthday, and at first I just used it to see how many steps I was taking regularly every day. It wasn’t until a couple months later that I started getting serious about it and decided I wanted something better.

I had the Flex, which was one of the cheaper ones, and while I like it, it doesn’t have a heartrate monitor. I decided on the Fitbit Charge HR, which costs $150.00 regular price. I really didn’t want to pay that much, so I decided to work hardcore to earn it using Swagbucks!

I talk a lot about Swagbucks as well, but I just can’t promote it enough! You can find the guide I wrote here, which explains the basics. We used it to help buy groceries when Allison was on formula, and now I use it for runs at Sam’s Club.

I’ve never saved up for something this big before though, so I knew I had to work hard at it. I started saving on August 17th, with almost enough to get my first $25.00 Amazon gift card, and I redeemed my last one on September 8th. Here’s how I earned $140.00 in less than a month!

First of all, I use the Swagbucks TV apps. There are 6 different apps you can play to earn Swagbucks that all work the same way. You watch a certain number of videos on your phone, which play automatically, and you’ll earn 2 Swagbucks after each round.

This varies greatly from day to day. Some days I’ll earn zero bonus points from any of the apps, and other days I can get 30+ extra Swagbucks from each app.

Here’s my daily routine: When I wake up in the mornings, I get out John’s old smartphone. It no longer works for making phone calls, but I can still use the Wi-Fi, so I start playing the apps. I’ll go through one app at a time throughout the day, going to the next app when I reach the maximum Swagbucks earned. If I’m off playing with Allison, I’ll just let it run, but when she’s sleeping and I’m near the phone, I’ll hit “Done” when the video is about 10 seconds in to make it go faster.

Most days I can earn the full maximum Swagbucks from the apps, which is 60 Swagbucks before bonuses.

During the day I’ll also run the Ncraves videos on my computer. What happens is you click on a video category, and you’ll watch a series of videos, clicking “Like” or “Not for me” to get to the next one. After a couple rounds of that, you’ll earn a small amount of Swagbucks.

What I recently found out though, is after you do a round where you click manually to get to each video, new categories will pop up with the blue circles in the corner.

This means that the videos will run automatically. There might be more videos to watch, but you earn more Swagbucks than the manual click ones, and you don’t have to keep clicking through!

You can earn 5-7 Swagbucks every 25 minutes or so. I just check my computer every so often to see if it’s run through, and then I re-click to get back to playing the videos again.

Surveys are one of the biggest money-makers, but do take a little more time, especially if you have trouble finding one you qualify for. The average survey takes about 10-15 minutes to complete, and can earn 50-75 Swagbucks per survey. I tried to do 2 or 3 per day, which took about an hour total each day. 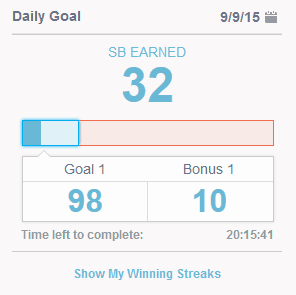 Every day you have a goal to hit, and if you hit that goal you’ll earn some bonus Swagbucks that will be awarded at the beginning of the next month. The amount is about 10% of your daily goal.

For example, my first daily goal could be 78 Swagbucks, and I’ll earn 8 bonus Swagbucks if I hit that goal. My second goal varies, but since I was earning a lot more than I usually do, it averaged about 450 Swagbucks, which meant I’d get about 45 bonus Swagbucks. If you hit your first goal every day for a full month, you’ll get a 300 Swagbuck bonus.

So add those two together the next month, and that’s a nice sum of money! I got about $9.00 worth sent back to me in Swagbucks, which really helped when redeeming my next gift card.

Swagbucks also had an event going on where if you did a certain number of surveys in one week, you’d get a rebate after you redeemed for a gift card. Taking 20+ surveys that week meant you’d get the equivalent of $10.00 back if you redeemed a gift card! I knocked those suckers out and got that rebate September 7th. 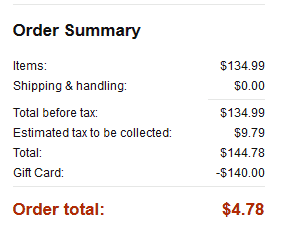 I saw that the Fitbit I wanted was on sale for $135.00 plus tax, so as you can see in the picture above, I only paid less than $5.00 for a $150.00+ Fitbit! I got my Fitbit on Thursday the 10th and I absolutely love it! The heart rate monitor is awesome with tracking my runs and workouts. 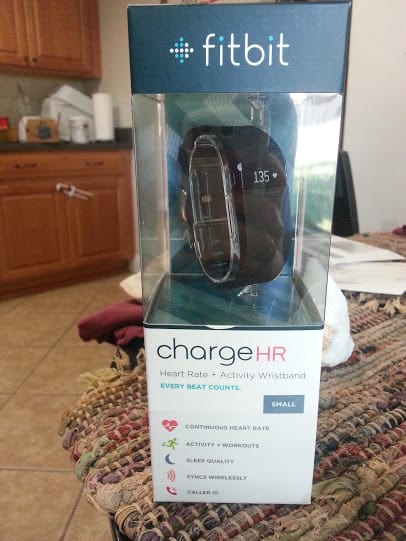 I SO love using Swagbucks to help me do things like this! It helps me stock up on essentials for our household, and if I work really hard, I can get awesome things like this Fitbit Charge HR! If you’ve never considered using Swagbucks before, I highly recommend you do so! Just click here to create an account and start earning your gift cards today!

i need to do this for my Kate spade boots I want!!

I signed up to do swagbucks a while ago but haven't really used it much. After reading this, I think I might have to go back and try it out!

I've never heard of swagbucks but sounds like a good way to earn some extra money if you have time. Sounds like you have it down to a science. Thanks for sharing!

Awesome, what a cool thing to earn! Wish I had the time to do this!