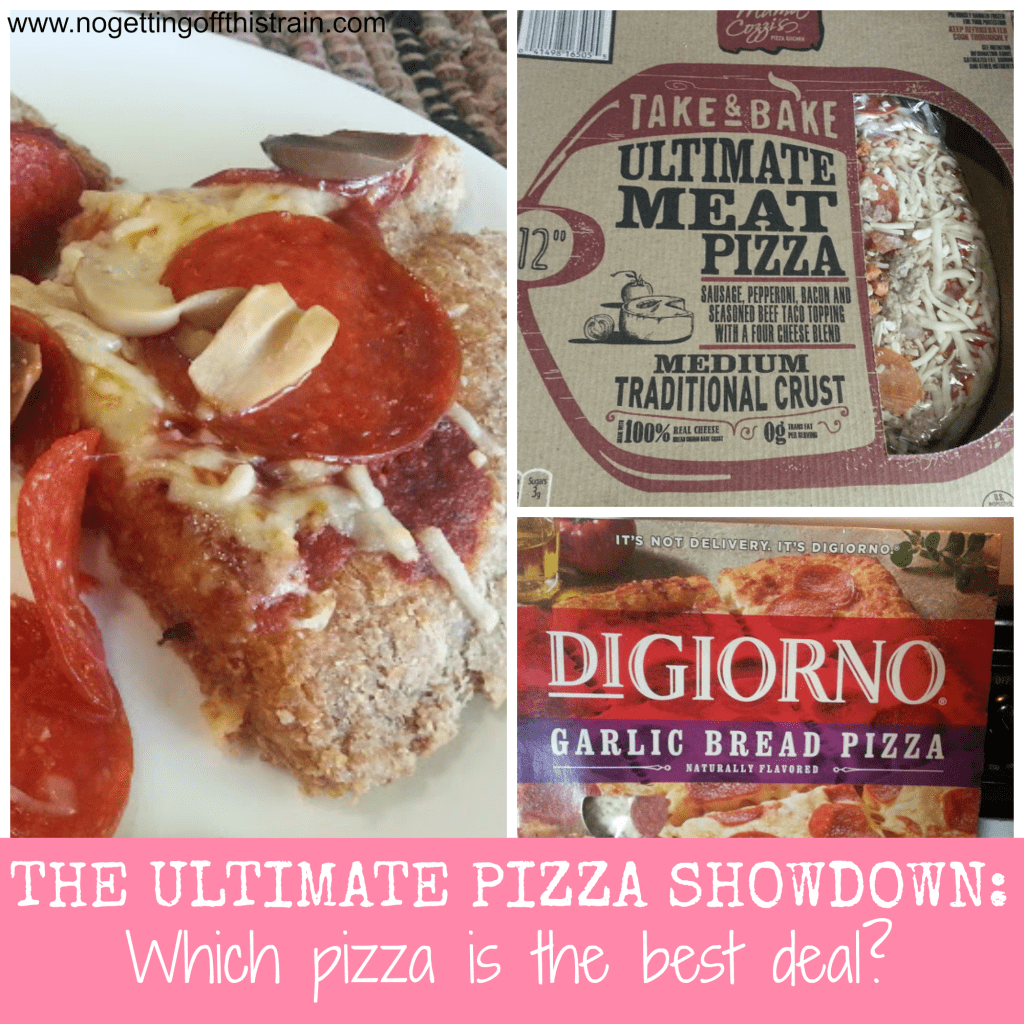 To celebrate National Pizza Month (and because we LOVE pizza in this house), I decided it’d be a great idea to eat tons of pizza this month for the sake of my readers, to give you a price and taste comparison of different kinds of pizzas. I know, I work so hard. I love comparing prices, though; it’s like a game for me and something I’m excited about doing! Today I’m bringing you three different kinds of pizza: My own personal homemade pizza, Aldi’s fresh take n’ bake pizza, and DiGiorno’s garlic crust pizza. I’ll be showing pictures of everything, as well as a price breakdown to show you which is the better deal!

I’ll start by saying we’re pretty simple in this house. It’s usually just pepperoni and jalapeno, with the occasional mushrooms (which Allison loves). I wouldn’t mind a few veggies, but the other two are kind of meh about it. I make my own crust and pizza sauce, and then buy the cheese, pepperoni, and mushrooms. 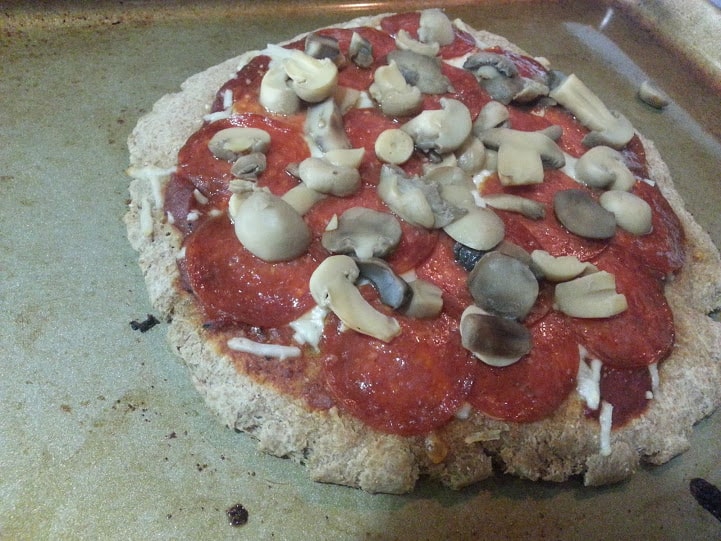 Here’s what my pizza looked like after it was cooked. Notice how I placed pepperoni all around to completely cover the pizza. And I actually made two pizzas out of this, because of how much dough the recipe makes. 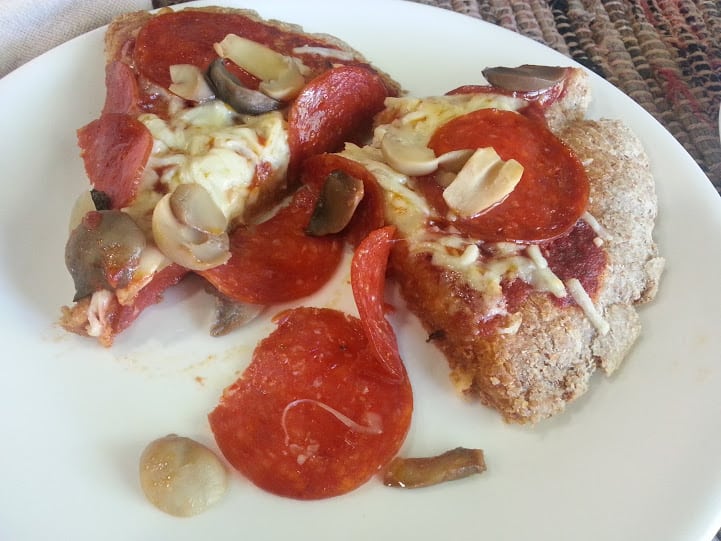 Final result: Delicious! I made a whole wheat crust, and it was so soft. I’m not a huge fan of crispy crust that I have to gnaw on in order to actually eat. And I love the sauce; I put a ton of Italian seasoning in it, as well as Parmesan cheese. It gives such a great flavor!

In terms of pizza, that’s a great price! And that’s actually for TWO pizzas! This fed 3 people and gave us enough leftovers for 3 more meals, at 2 pieces per serving. One thing you have to take into consideration is that you buy an entire container of cheese and pepperoni to make this pizza; I paid $2.79 for the cheese and $2.19 for the pepperoni. So while technically you’re paying more money to make homemade pizza, you have enough ingredients left over to make even more, so in the end, you’re actually saving money! 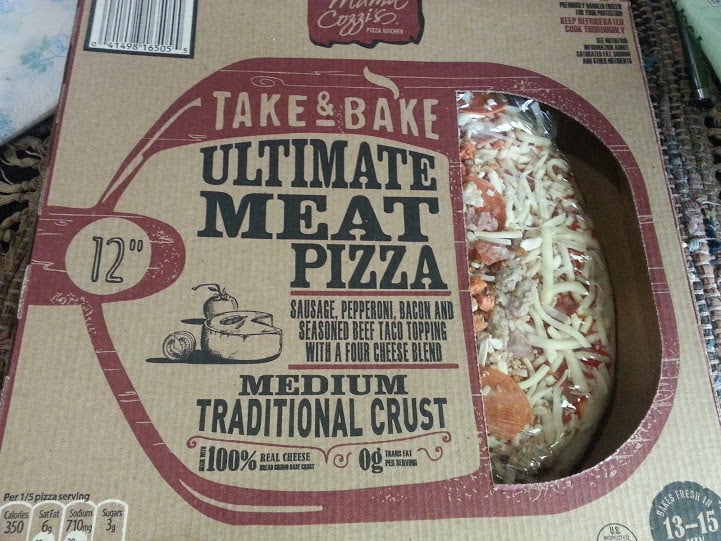 We had this pizza once before, back in July when we went on vacation. I have to say it was pretty good, especially with it being from Aldi! This was one of the small ones, and there was this kind plus I think a veggie deluxe. 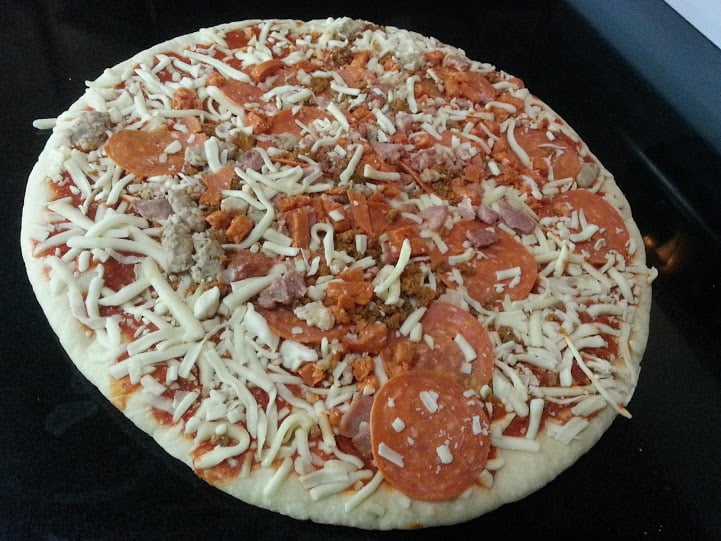 There’s not a ton of pepperoni on it, as you can see, but it does have other kinds of meat to make up for it. I immediately liked my homemade pizza a lot better due to the meat coverage. 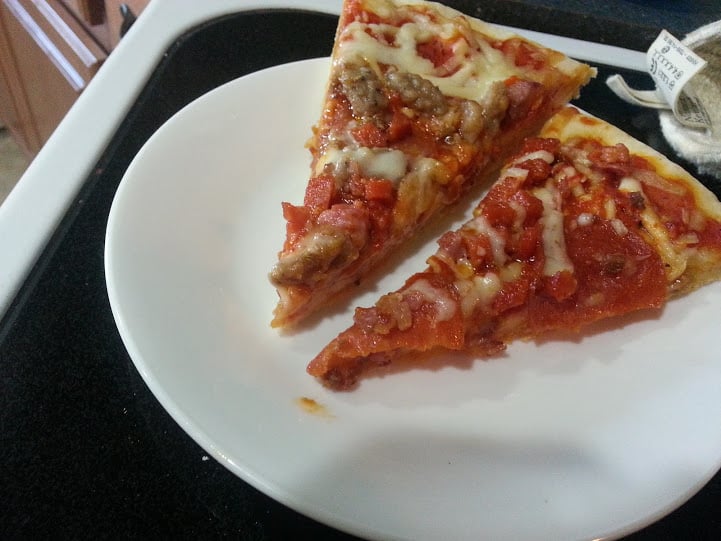 And here’s what it looks like after being baked. True story: I had to watch a video to figure out how to cut a pizza into 10 slices to make it fit the serving size. I almost felt ashamed, but I succeeded, and that’s all that matters. All in all, Aldi’s pizza isn’t too bad! The sauce is pretty good, and there was just enough meat to satisfy me. The crust was nice and soft, too! 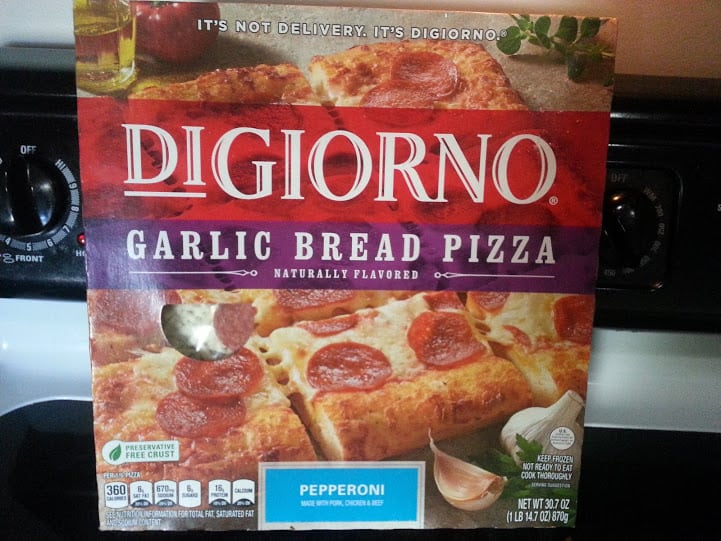 I usually just buy the regular kind of pizza, but this garlic bread pizza looked really good so I had to give it a try! What does it really look like? 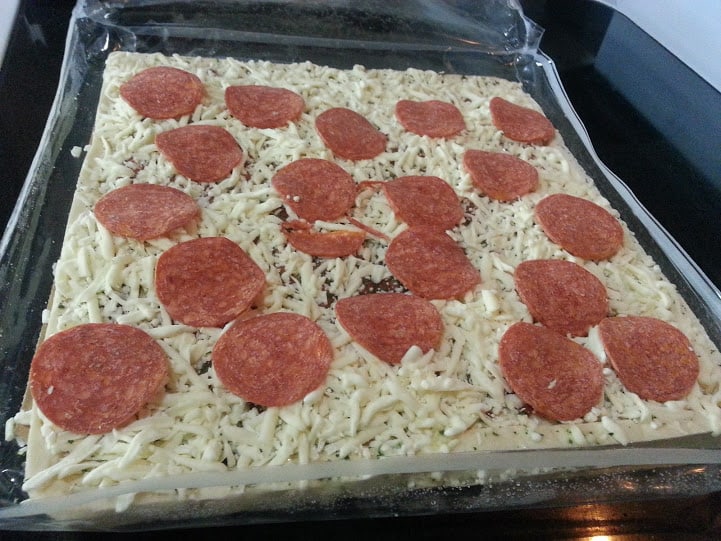 Hmm, this one is also pretty skimpy on the pepperoni. I’ll bet the garlic crust still tastes pretty good, though! 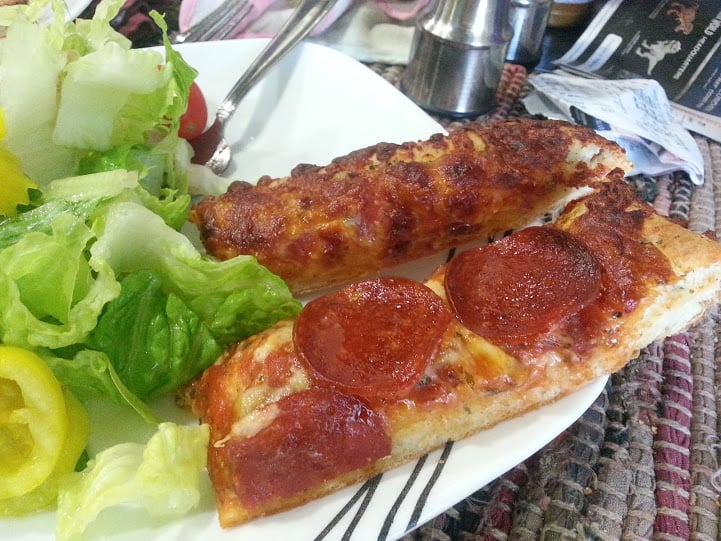 The slices are a little disappointing. The pizza serves 6, so we cut it into 12 pieces to get 2 each. It just doesn’t look like we’re getting a lot! And that one piece in the back doesn’t even have anything on it. DiGiorno pizza is pretty good, but this one was just a little meh. The crust had a slight garlic flavor, but nothing to get excited about.

Well, in terms of just cost, my homemade pizza wins. There’s just no beating the cost savings of homemade crust and sauce, and since you buy more ingredients than you use in one recipe, you’re saving tons of money because you can make it multiple times.

As for the taste, I think my homemade pizza wins again. I may be biased, because I love my sauce, but the fact that you can choose your own ingredients to put in just makes homemade pizza the best. I’m also not one to bash preservatives and avoid them completely, but it is nice to know you’re getting quality ingredients.

Now with all that being said, sometimes making your own pizza isn’t feasible and you just need something fast on a weeknight. If I were to choose, I’d say the Aldi Take n’ Bake is the better option over the DiGiorno. They’re both the same price, but I think the Aldi pizza tastes so much better and you get more toppings.

I just wrote a lot of words about pizza; I should probably be ashamed of this. But I had fun studying the prices (and of course, eating the pizza!), and while I would have liked to have tried a bunch more, I didn’t want to blow the budget or eat pizza every day for 2 weeks. Hopefully this gives you a good idea of the best deal on pizza, and what to consider for the future!

Do you have a favorite brand of pizza? Share in the comments!