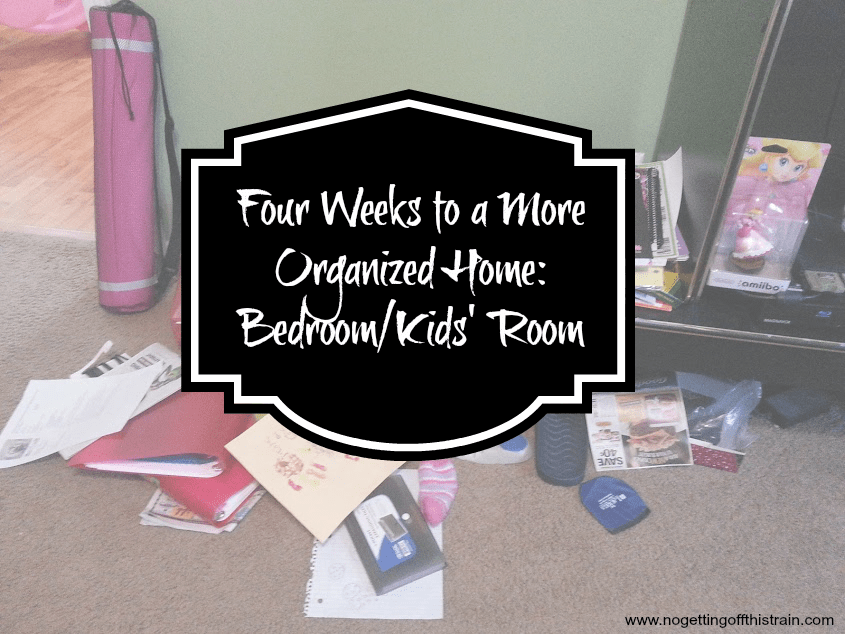 Welcome back to week 2 of Four Weeks to a More Organized Home! In case you missed it, here is last week’s post in which I de-cluttered my bathroom and laundry room. This week we’re going to focus on your bedroom and your kids’ rooms, if applicable! I admit, I was pretty intimidated because our bedroom has corners that we just don’t touch. Hopefully I’m not the only one here. You know, the corner that you just throw stuff in and it just accumulates, and now you’re afraid to touch it because of dust and spiders. I’m almost embarrassed to admit that. Anyway, here’s what I had to work with.

Oh my, here’s my little corner of blogging binders, recipes, and whatever miscellaneous stuff. I took a lot of the stuff I’m not immediately using and threw it in the office. My poor office; it’s the catch-all for all the things we’re getting rid of/wanting to organize in the office itself. You’ll see its hideous state next week. 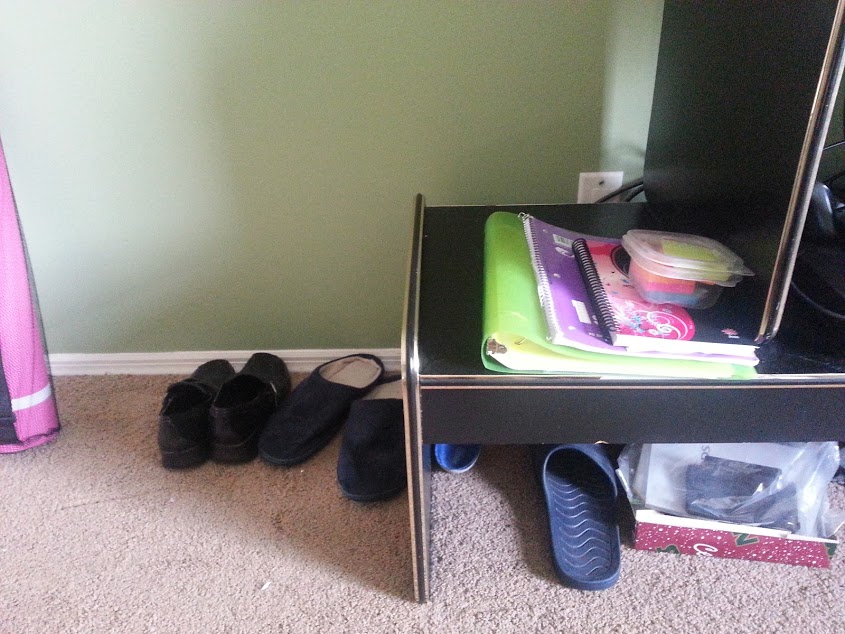 This looks a LOT better. I still need to get under the TV stand though, and figure out what all that stuff is.

My nightstand is another place that collects a lot of clutter. Receipts, coins, other random objects. Just a quick clean up did the trick!

My nightstand drawer was filled with random video game clutter, so I put the loose video games in the office (again with the office) and rolled up all the chargers to keep them straight. 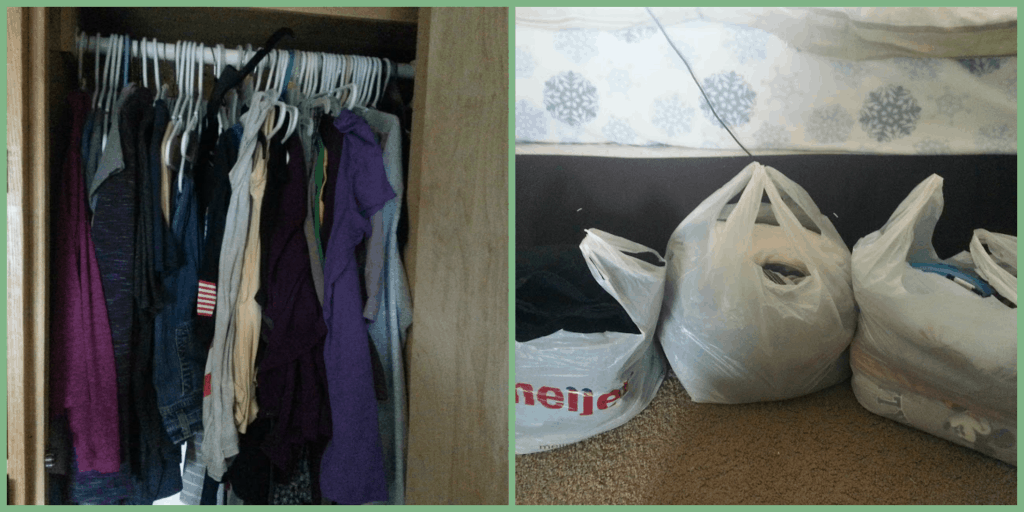 I had way more clothes than I thought, and I didn’t even get rid of everything. All the t-shirts that didn’t fit anymore were put into 3 grocery bags. I have several sets of scrubs that have my name embroidered on them so it’s not like anyone else can use them… so it’s to be determined what will happen with all those. On a happy note, I found 3 pairs of pants that fit me now! John’s closet/drawers have not been touched yet. I’ll bother him with it later. =)

We never actually got to the other corner with the comforter sitting on top of the chair. It’s been on our to-do list, but things got really busy and stressful this week. We’ll definitely work on it, though, at least before our garage sale in the spring! 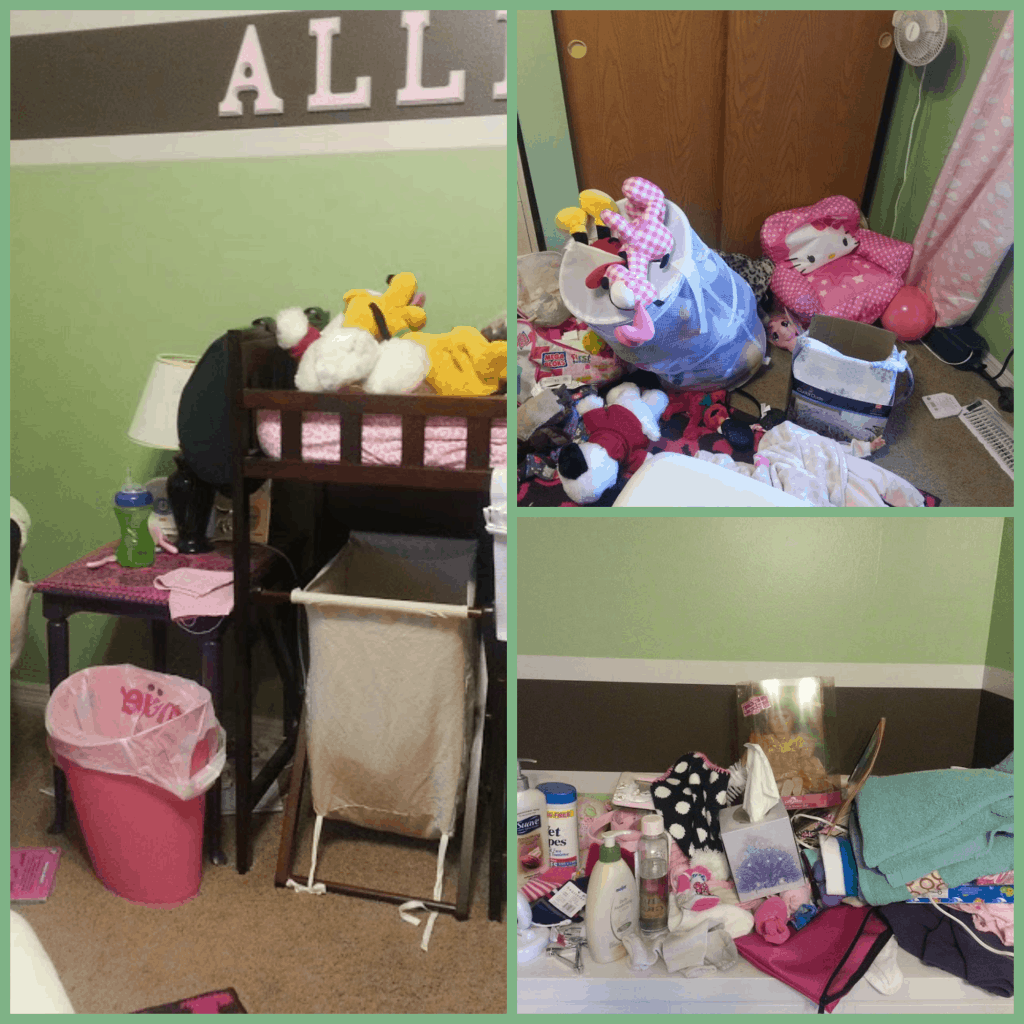 Oh boy, Allison’s room was a bit of a challenge. She has a lot of toys and books, and a changing table in her room that’s only being used for storage. I cleaned off her entire dresser top, got rid of a few toys/stuffed animals (Namely that Hello Kitty Chair, a big baby doll, and a huge Winnie the Pooh stuffed animal), and replaced her changing table with a cube shelf that was in the office. I also bagged up all her cloth diapers and liners, as they were taking up space, and I plan to look through them all and price them to sell. The one advantage of using cloth; you get most of your money back! 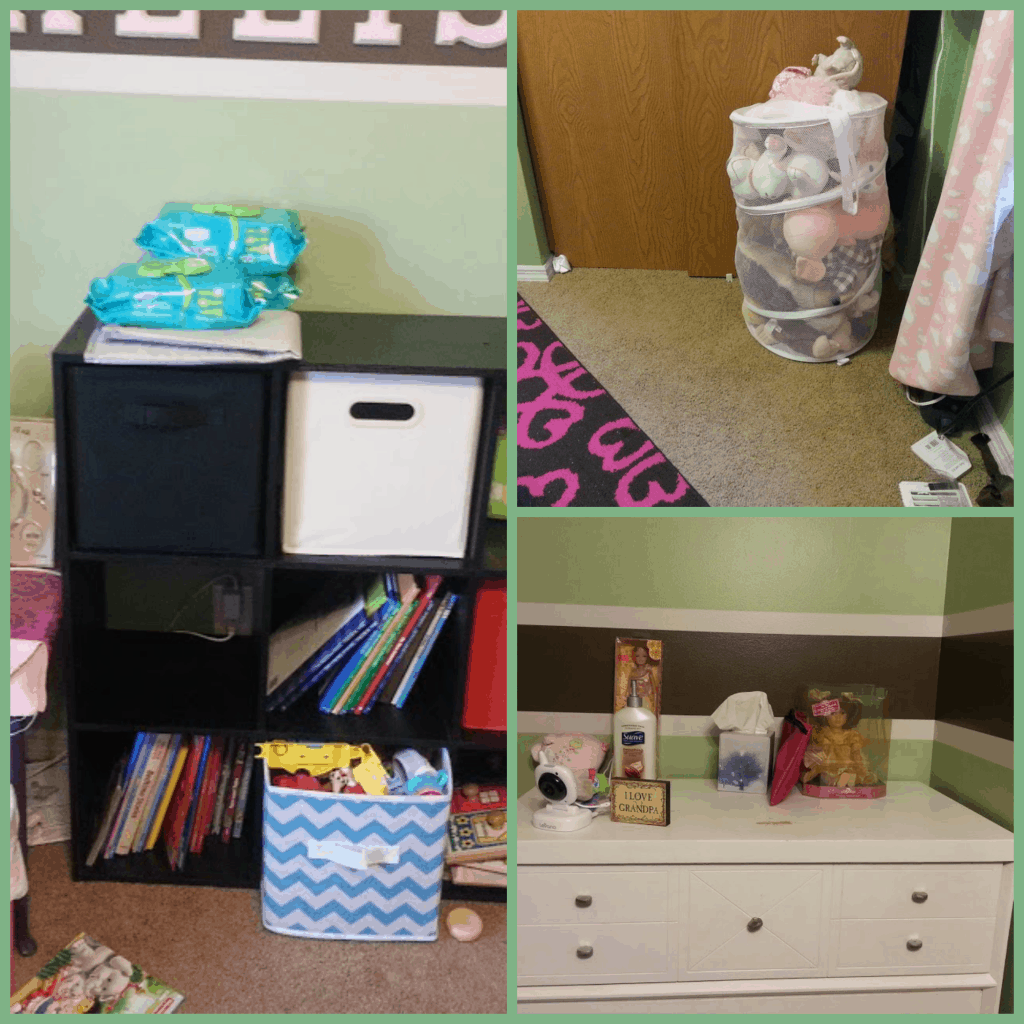 I took off a lot of books from her toybox and put them on the cube shelf. The top of her toybox, originally housing smaller books, is now filled with the stuffed animals that don’t fit in that huge mesh laundry bag. I already went through Allison’s clothes at the start of winter, so the only thing I did to the inside of the dressers is clean out all the diaper liners and place her bath towels in there instead.

Good luck this week! Tackling multiple bedrooms at once is very tricky, especially if you have tons of clothes… and toys… and more clothes. Just do as much as you can with the time you have, and see how much clutter you can get rid of!