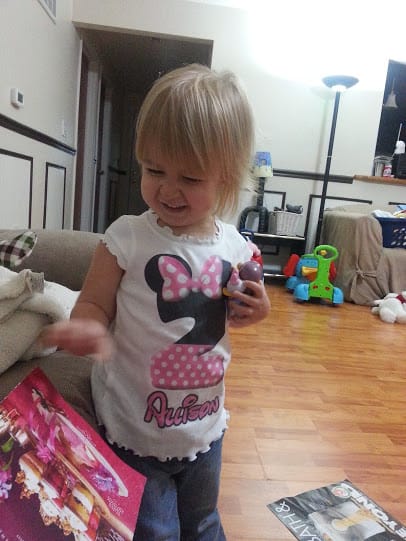 Yesterday my darling daughter turned 2 years old. I still can’t believe time has flown by so fast; she’s grown into a sweet, funny young lady who loves to run around nonstop. Today I’d like to reminisce about the day she was born; it was a very interesting couple weeks up until that day! Word of warning: Birth story means you may read some things you might not want to hear. I will try to keep things as clean as possible!

Allison’s due date was October 9th. John and I had taken classes up until that date, so we pretty much knew that with baby number 1, there was a good chance she would come late. My last day of work was September 28th, and I spent that week and a half just relaxing, taking extra naps, and maybe doing a little housework. It was so peaceful being in a quiet house, but I was super excited to meet my daughter for the first time.

October 9th came and went, and there was no sign of Allison. At that point, I was seeing my midwife every week, and she said that at 41 weeks she would do a stress test just to make sure Allison was doing okay. I was still very optimistic that she’d make an appearance soon! The stress test went well, and I was doing everything I could to get her to come out; I took multiple walks every day, but nothing seemed to work.

Two days before I turned 42 weeks, John and I saw the midwife one more time, and she said she’d like me to come to the hospital at 5:00 AM the next morning to be induced. Ugh. I didn’t have any strict preferences for my birth plan, although I would have liked to have gone naturally, but I knew it was no big deal.

The next morning, we were at the hospital bright and early to get things started. All I ate was a piece of toast, thinking eating a big meal wouldn’t be a good idea. In retrospect, I should have just had a huge breakfast because things didn’t get going until much later! We brought a big bag full of stuff, including my Playstation Portable to help pass the time. Um, what was I thinking? Did I really think I’d have time for that? Besides that, we just brought the basics: Clothes for me and John, extra clothes for Allison… I was sure we were all set. We were taken to the room and I was put on pitocin at 7:00 AM, starting out at a very low level. So far, so good! John and I sat and watched TV, my parents stopped by every so often to chat, it was awesome. The level of pitocin was upped little by little, and eventually I started to feel cramps, but nothing huge.

Around 2:00 PM there was a shift change, and a new nurse came in and looked at the pitocin level. “Oh, it’s at 13 right now? Let’s just ramp it all the way up to 20!” NOOOOOOOPE. I went from “pretty okay” to “OH MY GOD WHAT IS HAPPENING” in about 20 minutes. I absolutely wanted to die. I knew contractions hurt, but this wasn’t even on my pain scale. I was able to get my epidural about 30 minutes later, and thank God. Is it strange that the thing I was least looking forward to during this birth process was getting the epidural? I’ll push a baby out all day, but getting a long needle in my spine made me want to puke. Thankfully it took very quickly, and I had sweet, sweet relief.

The next 5 hours or so were great! My parents and sister came back for awhile, we laughed, talked…. we were like “Oh, I’m having a contraction? I don’t even notice!” My sister lovingly put it as, “Nothing much, just having a baby.” I don’t know how you moms do natural birth; I give you all sorts of credit, but it was definitely not for me! I don’t really remember how many centimeters I progressed every time, or even when my water broke. I do remember it being 7:00 PM and the midwife checking me, and she said it was time to push.

The setting was absolutely wonderful. I wanted to listen to Enya while I was in labor, so John bought a Bluetooth speaker and played it through his phone the entire time. The lights were dim, the music was playing, and the nurses kept saying how peaceful it was. Everything was perfect. I vaguely recall one of my massage clients calling me in the middle of pushing, and all I could do was laugh. She had been coming to me for years; a sweet older lady, and I knew she was just calling to check on me. How awkward would that have been to answer the phone? I’m laughing just thinking about it again. 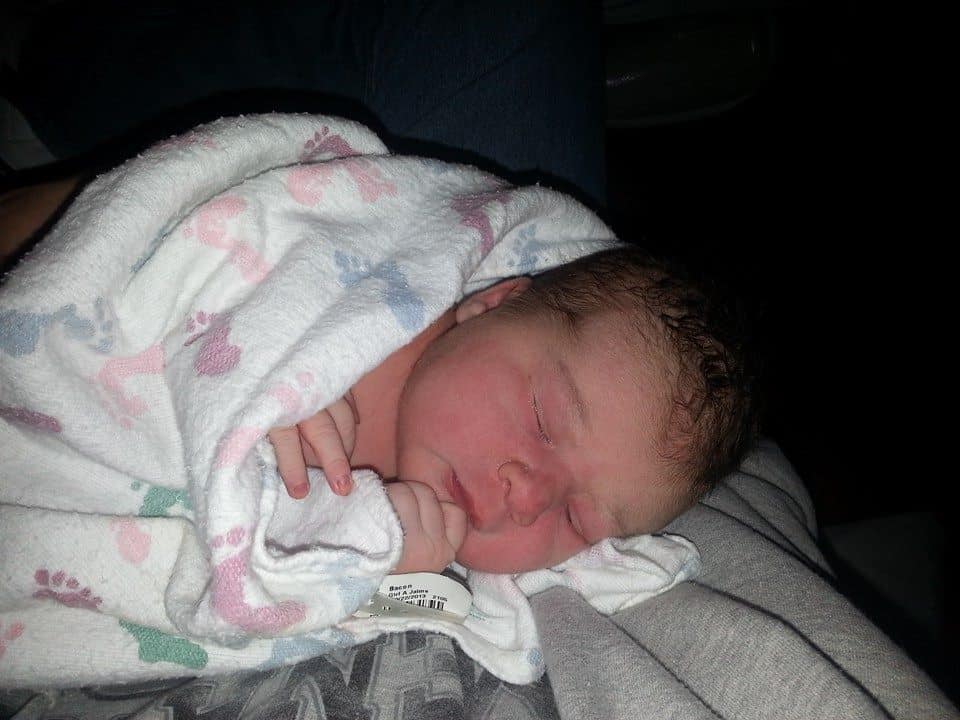 Two hours later, at 9:05 PM on October 22nd, little miss Allison came out crying. She was immediately placed on my chest, and for some reason the first thing out of my mouth was, “Is she really a girl?” Drugs do some strange things! It was very quiet for awhile, John and I just staring at Allison; I didn’t even notice how quiet everyone else had gotten until a surgeon walked in and said he had to fix me up real quick. My darling daughter had given me a third degree tear! Really? I didn’t even notice! That epidural held up strong, and thank God, because I couldn’t have done this without it.

He finished up and left, and the nurses took Allison to do the routine checks. My parents had left to get John some food, because he hadn’t eaten all day either. He was on his way back into the room when the nurse said, “Dad, do you want a picture of this?” She had Allison on the scale. Ten pounds. I had a ten pound baby. I didn’t think I was capable of that! At least then I knew why I had a tear.

Finally, after about 20 hours of not eating, I was offered a turkey sandwich, which I immediately scarfed down. Probably a half hour later, the nurses made me walk to the bathroom, which was a bad idea; I had apparently lost a ton of blood and after nearly passing out on the toilet, I threw up that delicious sandwich. Ugh. Thankfully, the next couple days went well enough. There were no other problems, and we got to go home Thursday afternoon. As for what happened next, well, you can read about it in my post about how we ate for $37.00 a week for a year. 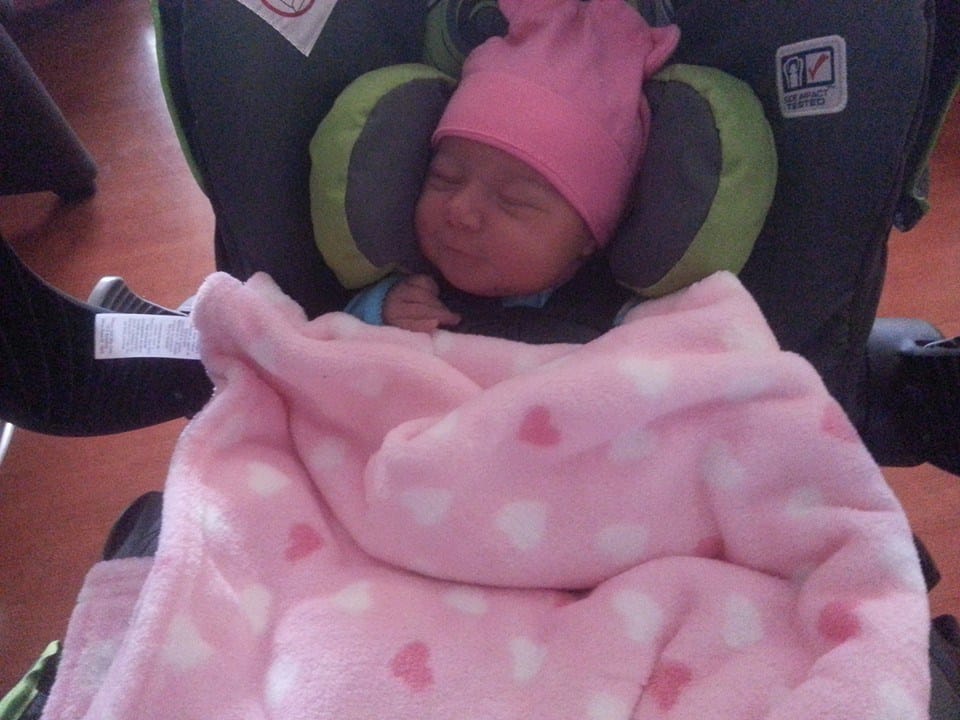 Having a baby was a real eye-opener in regards to how I previously spent my free time, taking care of another human being, and how much sleep I really needed. Being a mom is the hardest thing I’ve ever had to do, but I would not change a thing. Happy birthday, my little princess!