It’s an obvious fact: Babies need diapers. Whether using cloth or disposable, you still need to spend some money making sure your child is well-protected! But they can get so expensive, and it’s one of those things where you just look forward to when your kids are potty trained. Until then, you have to fork over some cash, but want to spend the least amount possible. How do you find the best deals on diapers? Where should you buy them? I’ve done some research over the past two years and have pretty much figured out the best price for diapers and and know how to look for the best deals, and today I want to share with you to help save some money in these long diaper years!

The most important thing to look for, no matter where you buy diapers, is the price-per-diaper. Just because a pack of diapers is on sale at the grocery store doesn’t mean it’s the best price; and on the other hand, buying a giant box of diapers may not always be the best deal, either. What you should do every time is calculate the price per diaper:

So as an example, let’s look at these two brands of diapers:

Here’s the Pampers Swaddlers Super Pack that I found on Wal Mart’s website. For the sake of keeping things in order, I’m only showing size 2 diapers as the price changes depending on the size. Wal Mart gives you the option of selecting a size, and will tell you how many diapers come with each size. They’re also nice enough to automatically calculate the cost per diaper! But if they didn’t, you would take $24.94, the price of the box, and divide that by 92, the number of diapers in the box. And that would come to 27.1 cents per diaper. Sound good? Let’s take a look at another brand.

I tried really hard to find a comparable-sized box of diapers, but for some reason Wal Mart doesn’t carry size 2 diapers in certain value boxes. As you can see, a box of Wal Mart’s brand of size 2 diapers, which has 160 diapers, costs $19.77, or 12.4 cents per diaper. That is a huge difference! In this case, it’s cheaper to buy both store brand and bigger boxes.

How about other stores? I’ve heard great things about Walgreens/CVS and the drugstore games. If you’ve never heard of the drugstore game, it’s where you buy items there on sale, that give you reward cash to use on the next visit, which can be used to buy more items to get reward cash back, and the cycle continues. You pay more at first, but end up saving money in the end. It can sometimes be a complicated process and you need to use the right coupons to make it work. Here’s an example taken from Hip2Save’s website: 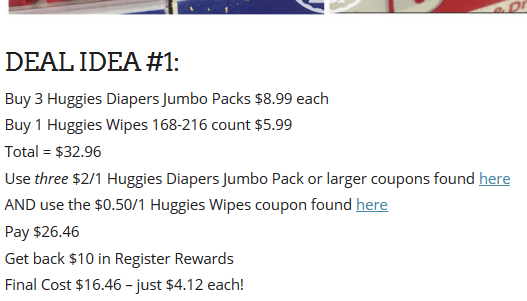 At Walgreen’s this week, you get $10 back in Register Rewards when you spend $30 or more in select Huggies products. Hip2Save shows you a scenario in which you buy 3 packs of diapers, 1 pack of wipes, and use 4 coupons to get the lowest price. Sound confusing? A little bit, but when I did the math, the size 2 diapers came out to 11.4 cents per diaper, which is cheaper than the Wal Mart brand! In order for this deal to be worth it though, you have to actually use those Register Rewards on your next visit, otherwise they’ll expire and you’ve wasted money.

So overall, what’s the best deal I’ve found on diapers? When it comes to store brand, definitely the Parent’s Choice listed above. If you don’t feel like doing a bunch of coupon scenarios, this is it. I really thought Sam’s Club was the cheapest, but their diapers are about 13.8 cents per diaper right now with their Instant Savings event. And if you’re worried about the quality because it’s store brand, I can attest that this brand worked very well for Allison. They were the exact same as anything else and weren’t lacking in quality at all! I know all babies are different and have different needs, so start with smaller packs first to see if they work for you. But if they’re okay, I definitely recommend the Wal Mart brand! As far as name brand diapers, that Walgreens scenario listed above is excellent, and I would now aim for less than 12 cents per diaper.

One thing I also want to talk about is Amazon Mom. It’s included with an Amazon Prime membership and you receive 20% off diapers when you use their Subscribe and Save option, which is where you receive an automatic shipment every month. A lot of moms swear by it because it’s really convenient, and I agree! There’s nothing worse than having to run to the store with a newborn because you ran out of diapers. But is it cheaper, even with the 20% off? 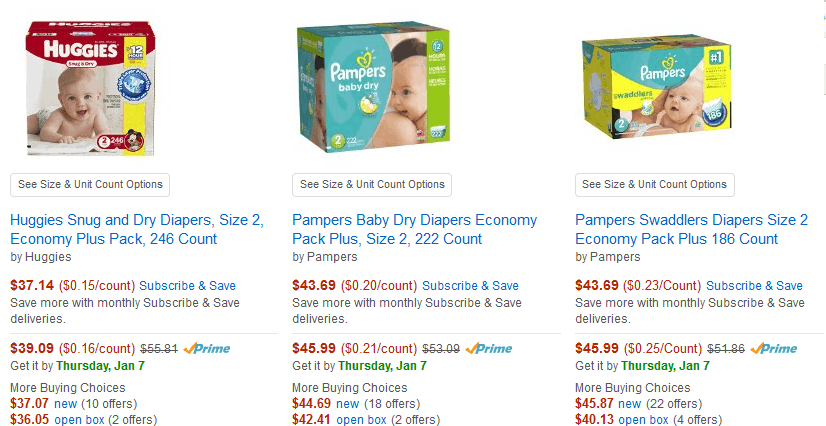 The cheapest I saw was the Huggies Snug and Dry above, at 15 cents per diaper. It’s still more expensive than the Wal Mart brand, but for a name brand diaper, that’s not too bad! So is it worth it? Maybe! If you like the convenience factor, it’s definitely worth it to pay 2 extra cents per diaper to have them delivered.

I hope all that information was helpful! Remember, always look for the price per diaper before making a decision. If you see diapers on sale in a grocery ad, do the math first to see if it’s a good deal! It’s not always about which store is the best (although as you saw above, Wal Mart has the cheapest store brand), so if you’re not fully store-loyal, make sure you shop around. If any of the above is incorrect or if you’ve found a better deal, please let me know!