Welcome! Before you leave, make sure to grab your FREE Healthy Meal Plan.. Thanks for visiting!

Meal Planning 911 is now open for enrollment! Click here to get more info and grab your coupon today!

We made it to the end of October!

Fall is here (finally), and October has been amazing. Trips to the zoo and Kings Island, celebrating my baby’s 5th birthday, and John starting a new job! Life is pretty good right now and I want to share what we’ve been up to this month in October’s Breakfast With Bacon. 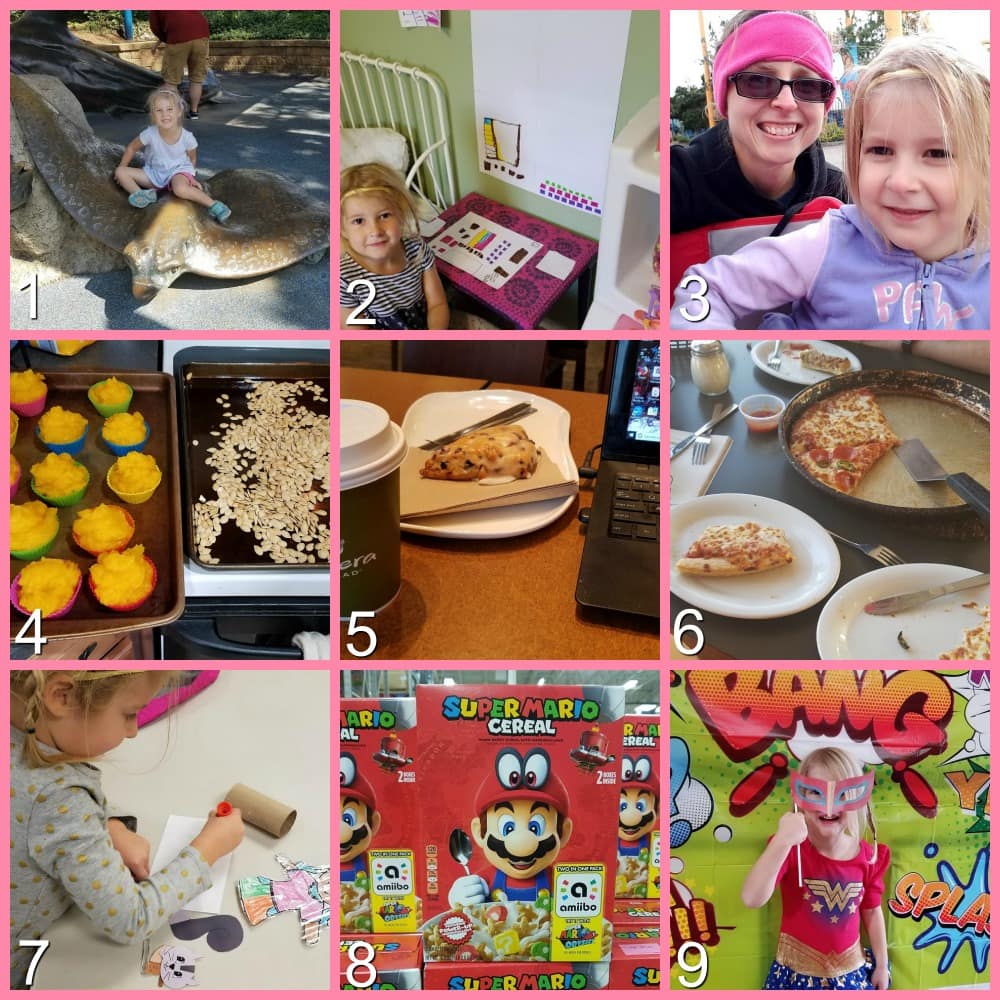 1.) Allison happened to have a day off from school this Monday, so the three of us took a trip to the Columbus Zoo! She’d never been before and had an absolute blast. Although she may have had more fun playing on the playgrounds than looking at animals.

Afterward, we stopped at Graeters for ice cream! Of course, I had to get the pumpkin spice flavor.

2.) She wanted to create her own computer desk like Mommy and Daddy, so she took a bunch of papers and created a screen, keyboard, mouse, and coaster. It’s still hung up on her wall, and it amazes me sometimes how creative this girl can be.

3.) It was a cold day at Kings Island! We celebrated my nephew and twin niece and nephew’s birthdays there and had a great time riding rides and eating all the food. Even though it was like 45 degrees and all of Ohio decided to stop by.

4.) I’m going to have nightmares about this forever. For some reason I thought it’d be a good idea to roast my own pumpkins, and make puree and pumpkin seeds. But I didn’t think it’d take two whole hours.

The puree turned out great, but the seeds were hard and I ended up having to throw them out because no one liked them. But, at least I know better for next time!

5.) Sometimes I just need to get out for a few hours. John let me sit at Panera for almost 3 hours last week with a coffee and a Triple Berry Scone. As a work-at-home mom, I have to find little pockets of time between sleep and school to get things done; and so having this extra time to work on stuff is definitely appreciated!

6.) Pizza Hut pizza is one of my weaknesses. And pizza is Allison’s main food group, so we had to go out to celebrate John’s new job on his first day! That girl can really pack in some pizza.

7.) Allison was the Star of the Week at school this week. And one of her jobs was to take that “Flat Stella” with her over the weekend on adventures. In addition to her birthday party, Flat Stella also accompanied us to the library for crafts!

8.) I am still 12 years old and I want that cereal like right now. Thankfully, Allison agrees. #gamergirls

9.) We had a blast at Allison’s birthday party! I posted some pictures on Facebook for you to see. It was Superhero-themed, as you can see; and she’s obsessed with the DC Superhero Girls. Mostly Wonder Woman. This new line of toys and shows is so cool- the girls aren’t scantily clad, and they empower girls like Allison to be strong, brave, and smart.

Fall Status- Finally here! We had like 2 weeks of Summer in the beginning of October, which was nuts. But it went from 80-degree weather straight into the 40s and 50s with no gradual transition into Fall. I won’t complain too much though, because now I actually enjoy my hot afternoon coffees without melting.

Running Goals- I’m taking a break from running for awhile. I’ve had a nagging hamstring pain for a whole year and it just won’t go away. Since I have no more races scheduled, I’m gonna take it easy. I’ll get regular massage every couple weeks (I used to be a therapist so I trade with my friend every week) and continue to try and work it out.

In the meantime, I’m doing a mixture of Beachbody’s Turbofire and PiYo and I’m loving it! It’s all mostly low-impact, I can do them in the early morning, and I don’t have to wake up at an ungodly time to go to the gym anymore.

Currently Listening To- The Dave Ramsey Show, Business Boutique, and the Do It Scared Podcast, all on Spotify. I’m in a podcast craze right now and listen as much as I can- right before Allison wakes up, while she’s in school, and while I’m making dinner. Anyone have good podcast suggestions?

Favorite Food- Currently, it’s soup and homemade bread- specifically this French Loaf recipe. I’m a carboholic, and it just pairs so nicely with a hot bowl of soup on a Fall evening. I need to make more like immediately.

What’s been going on in your world recently?

What’s your favorite part about Fall?